Adventures in Climbing and Parenthood

Perhaps it started innocently enough with a family trip to a climbing gym, or maybe your child was invited to a birthday party at a local rock wall. But now your kiddo is enrolled in a climbing club…and asking if you saw them do that sick dyno on the overhang, followed by an awesome heel hook to the finish!!

It’s time to admit, you have a ROCK CLIMBER. I’d like to help you navigate the world of climbing with some basics, so you can look cool in front of your kiddos by talking the lingo and understanding what they are saying. I’ll define some types of rock climbing, basic equipment, and terminology, so that you can better understand this incredible sport.

Your Child is a Climber and You’re Not (Yet) – Now What? 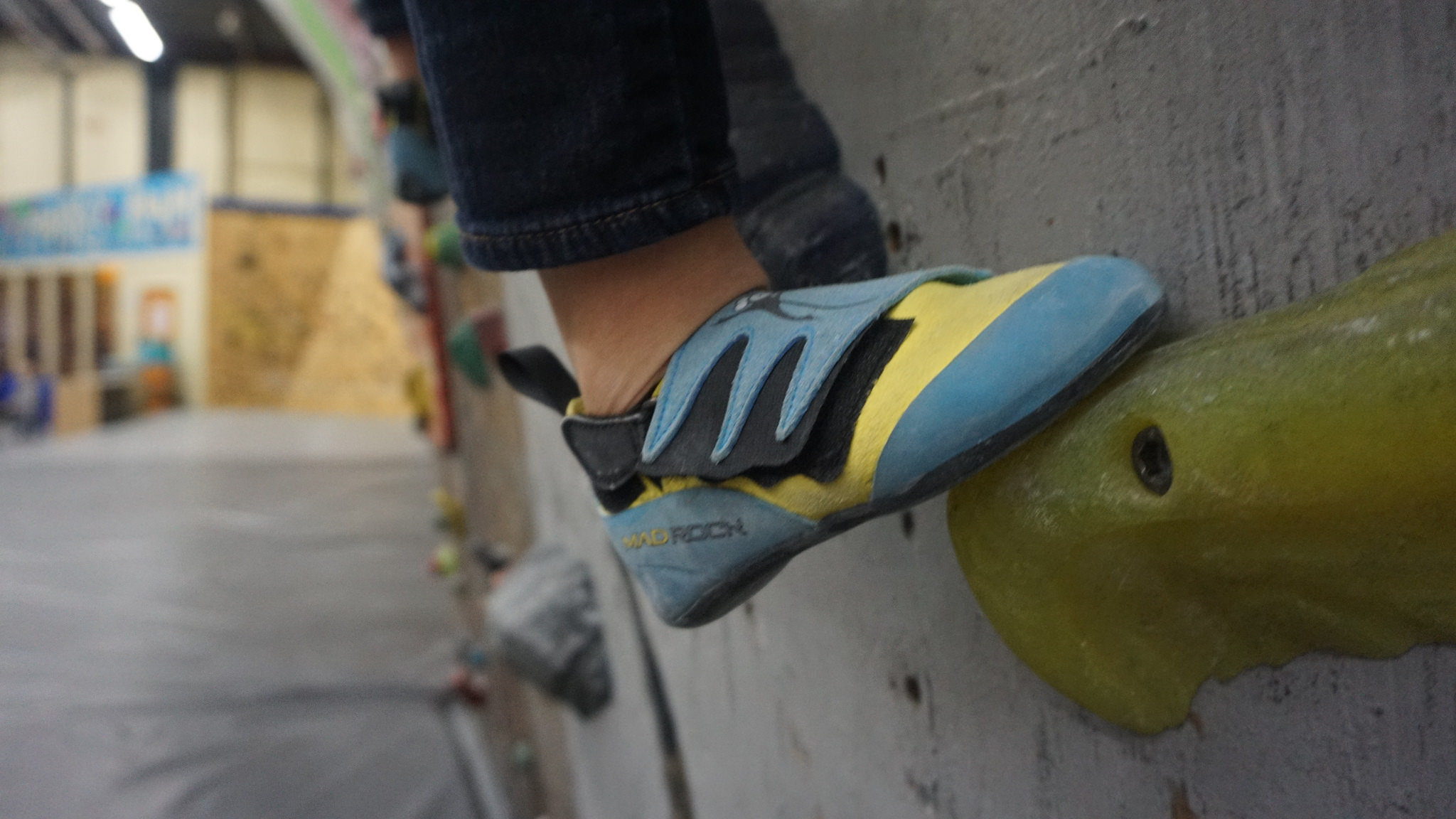 There are many ways to scale a mountain, ranging from climbing Mt. Everest (which is actually mountaineering) to climbing over a pile of rocks when hiking (which is scrambling). The two types of climbing that your children are mostly likely to be involved in are bouldering and sport climbing, so I’ll focus on those in this post. Either of these can be done outside or at a gym and can range in difficulty from very basic to insanely challenging.

Bouldering is a type of climbing that is done without a rope, where one climbs either a short wall in the gym or an actual boulder outside. When bouldering, the path that a climber will take (or the series of moves) from the bottom to the top of the wall is referred to as a bouldering “problem.” Typically, the only protection that the climber uses is a thick pad to absorb the shock of a fall. In many gyms the entire floor is padded under the designated bouldering area.

Outdoors, a climber will bring one or more “crash pads” to place under the rock they are climbing.  Bouldering normally involves more powerful moves (though closer to the ground) than sport climbing. The level of difficulty of a bouldering problem is frequently measured using the “V scale,” with the easiest of problems having a rating of V0. Right now, the hardest bouldering problem is rated V17!

Sport climbing is a form of climbing where the climber will ascend a rock face under their own strength, using a rope and harness for protection from falls, removable gear brought with the climber (quickdraws), as well as bolts and anchors permanently fixed to the rock. Just as in bouldering, one could sport climb outdoors or in the gym. Sport climbing can further be divided into two sub-categories: top-roping and lead climbing.

Top-roping is a basic form of sport climbing where a climber ascends the wall using a rope that is already fixed at the top of the route. Since the belayer (see definition below!) is managing slack in the rope, falls on a top-rope route are relatively small and people of all ages and abilities can enjoy.

Lead climbing, which is a more challenging form of sport climbing, requires the climber to take the rope (to which they are attached) up with them as they climb the route. The climber attaches the rope incrementally to the wall to minimize fall distances, finally affixing the rope to the anchors at the top of the route. Due to the potential for much bigger falls as well as the need for a keen understanding of rope management and solid climbing skills, lead climbing is typically enjoyed by those with years of experience and specialized training.

In sport climbing, the path that a climber takes from the bottom to the top of the wall is referred to as a “route” – just like the route that you take when driving from point A to point B. In the United States, most climbing routes are rated in difficulty and assigned a grade using the Yosemite Decimal System. For example, you may see a route in the gym that is labeled 5.10.  The first number – the 5 – is given to all routes in the sport of rock climbing. In the Yosemite Decimal System, a first number of 1 would indicate a flat hiking trail. A 5 indicates that technical rock climbing skills are required, and an unprotected fall could potentially be fatal. The number after the decimal – in our example the 10 – is a designation for the difficulty of that route. The current difficulty ranges from 5.1 (extreme beginner) to 5.15d (extremely advanced). In the upper difficulty levels, beginning with 5.10, grades are further subdivided with a letter extension (a through d, with d being the hardest in that grade level). 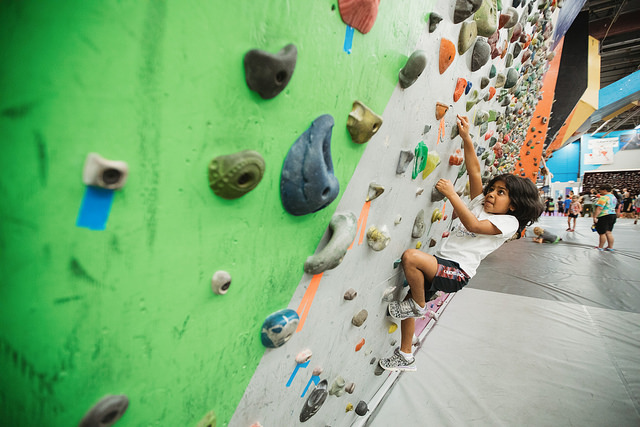 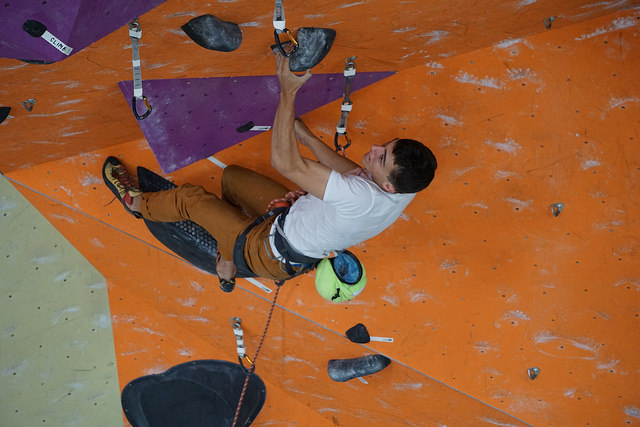 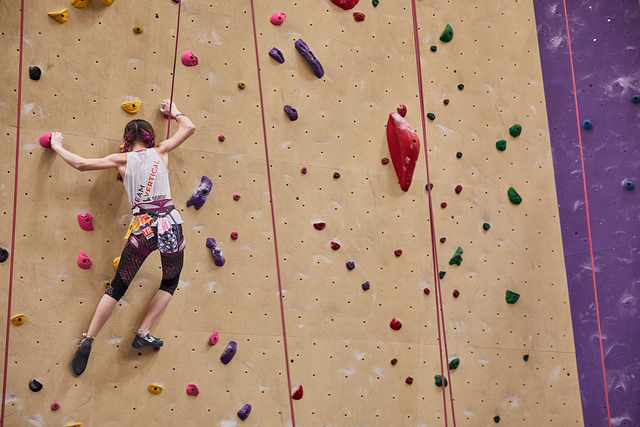 Perhaps by this point in your child’s climbing career they have begun to excitedly spout off all sorts of climbing terms that they may have learned in a class. If you are still in the dark, fear not!  I have compiled a VERY basic list of terms for your reference, categorized for your convenience

A hold is what you grip with your hands or stand on with your feet when you climb. Outside, they are formed by variations in the rock face. Indoors, they are made in all shapes and sizes – including those that look like animals! 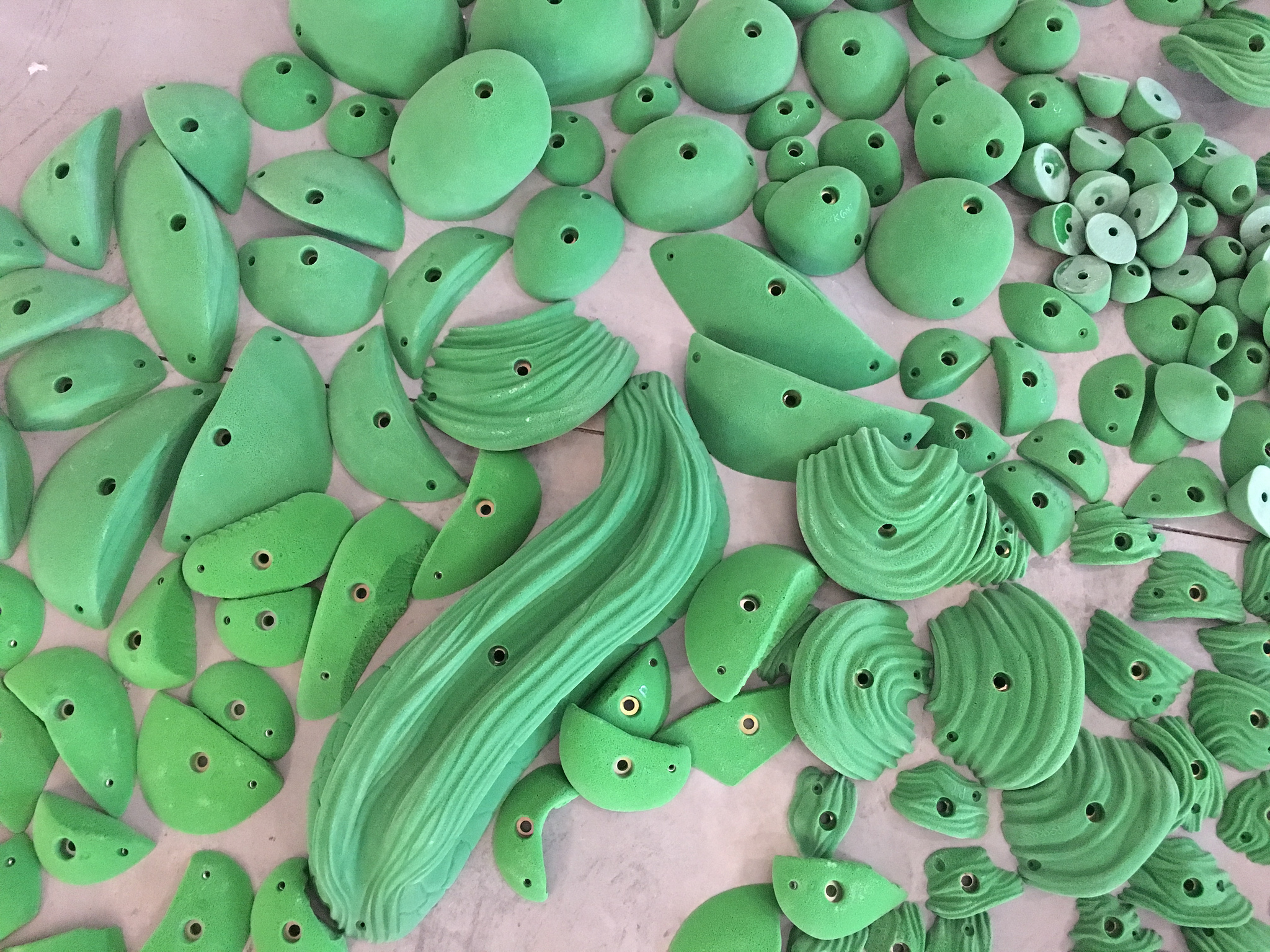 Chip – a tiny hold for standing on

Crimp – a tiny hold that only the fingertips can grip

Jug – the easiest type of hold to hang onto, typically large in size, and named for its resemblance to a handle on a water jug

Pocket – a hold with an opening that one or more fingers can fit in, like a pants pocket

Sloper – a rounded hold with no discernible place to grip with the fingers, the climber must rely on friction from skin surface area on the hand to hang on

Vertical – wall face that is predominantly perpendicular to the ground

Slab – wall face that makes an angle of less than 90 degrees with the ground (i.e. the wall leans away from you when standing in front of it)

Overhang – wall face that makes an angle of more than 90 degrees with the ground (i.e. that wall leans towards you when standing in front of it)

Barn Door – when a climber begins to fall off a route, much like a door opening, due to only having two points of contact on the wall on the same side (i.e., having a left hand and a left foot on the wall, but no right hand and right foot)

Belay – to manage the ropes for someone, and take up slack, as they climb

Crag – whether indoors or out, the place where you go to climb!

Dyno – short for “dynamic,” refers to a jumping move where the climber may completely lose contact with the wall before grabbing a hold and returning to a route

I hope that I have given you at least a little bit better understanding of the sport of rock climbing and all the new language that comes with it. Whether you’ve been inspired to join your kiddo on the wall, or prefer to stay on the ground happily belaying, you’ll have the knowledge to “talk the talk” with your climbing kids!